The action-packed motion comic will be available on Blu-ray in August.

In an early announcement to retailers, Shout Factory will be releasing 'Red Sonja: Queen of Plagues' on Blu-ray on August 2.

Red Sonja, the She-Devil with a Sword, intends to pay back a blood debt owed to the one man who has gained her respect... even if it means leading a doomed army to their certain deaths! Who is Dark Annisia, and how has this fearsome warrior accomplished what neither god nor demon has been able to do: force Sonja to her knees in surrender? An epic tale of blood, lust, and vengeance, Queen of the Plagues takes Red Sonja from the depths of her own grave to the heights of battlefield glory.

Specs haven't been revealed yet, but supplements include a featurette including brand-new interviews with Writer Gail Simone as well as members of the cast and crew.

You can find the latest specs for 'Red Sonja: Queen of Plagues' linked from our Blu-ray Release Schedule, where it is indexed under August 2. 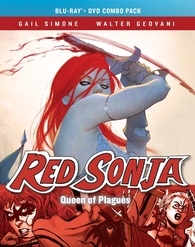