The 1988 R-rated horror flick will be coming to Blu-ray next year.

In an early announcement to retailers, Shout Factory says 'Lady in White' will arrive on Blu-ray sometime in 2016.

Locked in a school closet during Halloween 1962, young Frank witnesses the ghost of a young girl and the man who murdered her years ago. Shortly afterward he finds himself stalked by the killer and is soon drawn to an old house where a mysterious Lady In White lives. As he discovers the secret of the woman he soon finds that the killer may be someone close to him.

You can find the latest specs for 'Lady in White' linked from our Blu-ray Release Schedule, where it is indexed under PENDING. 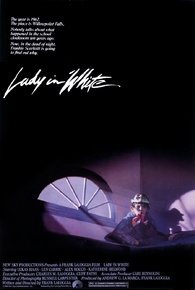