The powerful 1977 adaptation of the Gospels will be available on Blu-ray next month.

In an early announcement to retailers, Shout Factory will be releasing 'Jesus of Nazareth: The Complete Miniseries' on Blu-ray on February 23.

One of the most magnificent mini-series ever created, the life of Jesus is majestically and movingly portrayed in Franco Zeffirelli’s Jesus of Nazareth, an unforgettable portrait of the life of Jesus. Beginning before the Nativity and extending through the Crucifixion and Resurrection, Jesus Of Nazareth brings to life all the majesty and sweeping drama of the life of Jesus as told in the Gospels.

A star-studded international cast adds depth and humanity to this acclaimed depiction of the life of Jesus (played by Robert Powell), featuring performances by Olivia Hussey (Romeo and Juliet), Ernest Borgnine (Marty), Sir Laurence Olivier (Spartacus), James Mason (North by Northwest), Anthony Quinn (Lawrence of Arabia), Anne Bancroft (The Graduate), Ian McShane (Deadwood), Rod Steiger (On the Waterfront), Christopher Plummer (The Sound of Music), Michael York (Cabaret) and more in this rewarding, uplifting and faith-affirming portrayal. Presented with stunning depth, gravity, and emotion and acclaimed by critics and viewers alike, Jesus Of Nazareth remains one of the finest depictions of the story of Christ nearly forty years after its release.

You can find the latest specs for 'Jesus of Nazareth: The Complete Miniseries' linked from our Blu-ray Release Schedule, where it is indexed under February 23. 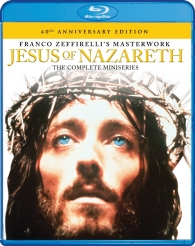