In an early announcement to retailers, Shout Factory is preparing 'Colors: Collector's Edition' for Blu-ray on March 7.

In the 'hood, all that matters are your colors... Bob Hodges (Robert Duvall) is a seasoned street cop who has learned a lot from long experience while his new, young partner, Danny McGavin (Sean Penn), has learned nothing - yet knows it all. Forced to work together in the L.A.P.D.'s renowned C.R.A.S.H. anti-gang unit, they set out to investigate a brutal gang murder. Hated and hunted by both sides, the cops soon find themselves trapped in the middle of a turf war. With nowhere to turn, they are ambushed, double-crossed and shot at in a take-no-prisoners street battle. As the violence escalates, these two diametrically opposed men must come to terms with one important fact - to stay alive they must come together!

The release will will feature the Unrated Cut of the Film, including footage restored from the International Cut and the original Home Video Cut. Supplements include: A Cry of Alarm – An interview with screenwriter Michael Schiffer; and Cops and Robbers – An interview with Technical Advisor/Ex-L.A.P.D. Gang Division Dennis Fanning.

You can find the latest specs for 'Colors: Collector's Edition' linked from our Blu-ray Release Schedule, where it is indexed under March 7. 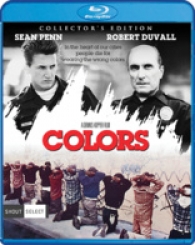