The drama starring Robert Duvall and Sean Penn is coming to Blu-ray in February.

In an early announcement to retailers, Shout Factory is preparing 'Colors' for Blu-ray on February 21.

In this gritty police drama from director Dennis Hopper, street-wise cop Bob Hodges (Robert Duvall) and hotheaded rookie Danny McGavin (Sean Penn) grapple with their new partnership on the gang-ridden streets of Los Angeles. Although Danny finally lets Hodges show him the ropes, his adrenaline-fed brutality earns him a reputation with the very gangs they want to help. With a gang war ready to explode, Danny confronts his own racism even as he falls in love with Louisa (Maria Conchita Alonso).

You can find the latest specs for 'Colors' linked from our Blu-ray Release Schedule, where it's indexed under February 21. 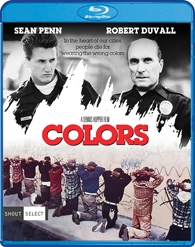