Colin Theys' 'Deep in the Darkness' Bound for Blu-ray

The horror film starring Dean Stockwell is planned for Blu-ray next month.

In an early announcement to retailers, Shout Factory will be releasing 'Deep in the Darkness' on Blu-ray on April 21.

Dr. Michael Cayle thought leaving the chaotic lifestyle of New York City behind for the quiet, small town of Ashborough would bring his family closer together. Soon after arriving, however, he discovers the town's deepest secret: a terrifying - and controlling - race of creatures that live amongst the darkness in the woods behind his home.

Specs have yet to be revealed, but supplements will include a trailer, TV spots, and Meet the Makers.

You can find the latest specs for 'Deep in the Darkness' linked from our Blu-ray Release Schedule, where it is indexed under April 21. 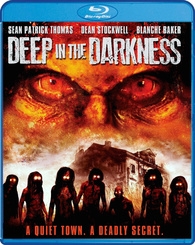