The inspirational feature film will debut on Blu-ray in July.

In an early announcement to retailers, Shout Factory says 'Endgame' on Blu-ray on July 5.

Endgame is a fictional story based on true events - how an impoverished high school in the border town of Brownsville, Texas, started a chess team and went on to become state champions. The touching family-friendly film also touches on the subjects of immigration, teen drinking, being true to one’s self, and bullying.

Rico Rodriguez plays Jose, who is struggling with living in the shadow of his popular soccer-star brother, who is favored at school as well as by their mother. He finds comfort in playing chess with his abuelita (Ivonne Coll), who has been teaching him to play like his grandfather, a champion in Mexico.

Now as part of the Brownsville school team, Jose has the chance to use his chess skills and, for once in his life, find himself in the spotlight, as he tries to help his team make it to the Texas state finals. As their coach, Mr. Alvarado, teaches his students the meaning of perseverance and team effort in the face of adversity, Jose discovers his own strengths and uses them to bring his broken family together.

Efran Ramirez plays Jose’s coach Mr. Alvarado, a role inspired by J.J. Guajardo, the real-life teacher and chess coach who led Brownsville to win the Texas State Chess Championship, and become recognized as a force to be reckoned with in the world of competitive chess.

Endgame was directed by Carmen Marrón (Go For It!), a former guidance counselor with a dream of making films with positive role models for Latino kids. Shot in Brownsville in just 19 days, the film captures how a determined and caring teacher and his chess club found a way to help students rise above their challenges to meet a brighter future.

Following a warm reception in theaters in 2015, Endgame is premiering on HBO this July.

You can find the latest specs for 'Endgame' linked from our Blu-ray Release Schedule, where it is indexed under July 5. 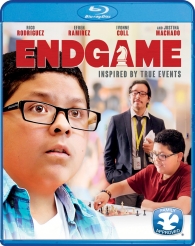