The Pop n’ Lock Classics are bound for Blu-ray in April.

In an early announcement to retailers, Shout Factory is working on 'Breakin' / Breakin' 2: Electric Boogaloo' for Blu-ray on April 21.

In Breakin’, rich girl Kelly learns the moves of the street under the tutelage of Ozone and Turbo. In spite of her disapproving dance instructor, Kelly overcomes the odds to become a popping and locking princess – and the secret weapon in Ozone and Turbo’s battle against rival dance team Electro Rock. The beat doesn’t slow down for the slammin’ sequel to Breakin’, Breakin’ 2: Electric Boogaloo! A hip-hop homage to the “hey kids, let’s put on a show!” musicals of Hollywood’s yesteryear, this fly follow-up finds our heroes coming to the rescue of a community center facing demolition at the hands of a greedy real-estate developer. Featuring even more fancy footwork than the original film, Breakin’ 2: Electric Boogaloo is unquestionably the greatest film (title) of all time.

You can find the latest specs for 'Breakin' / Breakin' 2: Electric Boogaloo' linked from our Blu-ray Release Schedule, where it's indexed under April 21. 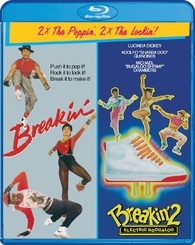