The film by René Sampaio is headed for Blu-ray next month. You can pre-order the Blu-ray here.

In an early announcement to retailers, Shout Factory is set to release 'Brazilian Western' on Blu-ray on November 18.

'Brazilian Western' is a film adaptation of the popular song "Faroeste Caboclo" by Brazilian music icon Renato Russo and tells the story of love, blood and revenge. João de Santo Cristo is a young man who leaves his impoverished home behind in search of a better life. Arriving in Brasilia, he soon falls for the beautiful Maria Lúcia, the daughter of a senator. But as their relationship flourishes, João's involvement in drug trafficking causes him to slide deeper and deeper through a downward spiral of crime and violence. The stakes become even greater as João finds himself on a collision course with playboy drug dealer Jeremias, his rival in business – and for the heart of Maria Lúcia.

The Blu-ray will feature 1080p video, a lossless 5.1 soundtrack, and supplements will include Making-of and Trailer.

You can find the latest specs for 'Brazilian Western' linked from our Blu-ray Release Schedule, where it is indexed under November 18. 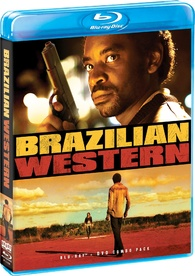