The 80s action flick is heading to Blu-ray in March.

In an early announcement to retailers, Shout Factory is preparing 'Braddock: Missing in Action III' for Blu-ray on March 15.

Colonel James Braddock is back in Vietnam, this time fighting his own personal war, as he goes in to rescue the son he's never met from a ruthless Vietnamese general--a vicious man who will stop at nothing to see Braddock dead. At the heart of this adventure is the sad plight of Amerasian children--the orphans of Vietnam born of native mothers and American G.I's--and it is Braddock's decision to come to their aid that lends a noble, humanitarian view. The saga continues with a stirring and uplifting new chapter.

You can find the latest specs for 'Braddock: Missing in Action III' linked from our Blu-ray Release Schedule, where it's indexed under March 15. 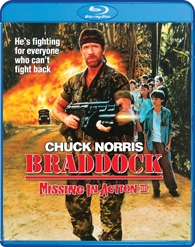 Discs mentioned in this article: (Click for specs and reviews)
Braddock: Missing in Action III (Blu-ray)