'Bodyguards and Assassins' Set for Blu-ray in June

The Hong Kong action flick is fighting its way toward Blu-ray in June.

In an early announcement to retailers, Shout Factory is preparing 'Bodyguards and Assassins' for Blu-ray on June 14.

Donnie Yen (ˆBlade II, IP Man, Hero) and MMA fighter Cung Le star in this gripping martial arts blockbuster set in the bustling metropolis of Hong Kong in 1905. The revolutionary movement has spread throughout China, but the corrupt Qing dynasty will do antyhing to hold on to its power. As Sun Yat-Sen prepares for a historic meeting that will shape the future of the country, a motley crew of men and women are entrusted to protect him from a group of deadly assassins who will stop at nothing to kill him. Winner of eight Hong Kong Film Awards, including Best Film, and featuring an hour-long battle sequence unlike anything attempted before, it;s a pivotal action epic that's being hailed as "a satisfying mix of politics, personal sacrifice and death-or glory comabt" (Richard Kuipers, Variety).

You can find the latest specs for 'Bodyguards and Assassins' linked from our Blu-ray Release Schedule, where it's indexed under June 14. 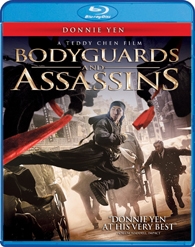 Discs mentioned in this article: (Click for specs and reviews)
Bodyguards and Assassins (Blu-ray)