Six classic Peter Sellers comedies will be getting a high-definition box set release later this year.

As previously reported, Shout Factory was preparing 'The Pink Panther Film Collection' for Blu-ray on April 11, but now the date has been changed to June 27.

The reason for the delay is Shout Factory is finishing up work on the new scans for some of the movies in this set plus some new interviews as well.

The Pink Panther (1963) - Meet Inspector Jacques Clouseau, the bumbling French detective whose career is one gigantic banana peel. Showcasing the comic genius of Peter Sellers, this "delightful caper" (Leonard Maltin) brims with "winning charm" (The Film Daily) and clever slapstick. David Niven, Robert Wagner and Capucine co-star in the sidesplitting film that launched one of the greatest comedy series of all time!

Arriving at an Italian ski resort with a large diamond known as the Pink Panther, Princess Dala (Claudia Cardinale) encounters the suave Sir Charles (Niven), who also happens to be the notorious jewel thief The Phantom. Can Clouseau (Sellers), the clumsiest inspector ever to trip over a case, stop Sir Charles' plot...or will The Phantom steal the "cat" and leave Clouseau holding the bag?

A Shot in the Dark (1964) - When a beautiful parlor maid (Elke Sommer) is accused of murdering her lover, the nutty Inspector (Sellers) leaps...er, falls...into the fray to save her in this irrepressibly funny Pink Panther classic.

The French have a word for a man like Clouseau: idot! Across Paris, baffled citizens want to know if the inspector is in hot pursuit of a criminal...or just in love with one! Mistakenly assigned to a high-prestige case in which a millionaire's chauffer has been murdered, Clouseau finds himself falling for the prime suspect - a beautiful parlormaid whose talent for being in the wrong place at the wrong time is almost as great as his. But as the body count grows higher, and the parlormaid's criminal record grows longer, Clouseau realizes he'll have to find the "real" culprit quickly or his career will be flint!

The Return of the Pink Panther (1975) - The comic genius of Blake Edwards and Peter Sellers meet again in The Return of the Pink Panther. The Pink Panther Diamond is stolen with only one clue left behind - a white glove, the trademark of the world-renowned jewel thief, The Phantom (Christopher Plummer). Believed to be retired, he immediately becomes the chief suspect on Inspector Clouseau's list. Wanting to clear his name, The Phantom sets out to find the real thief and sends Clouseau bumbling along on a false trail. Inspector Clouseau's antics finally push his boss, Chief Inspector Dreyfus, over the edge and he sets out to murder Clouseau to be rid of him once and for all!

It's non-stop laughs in this timeless comedy masterpiece, hailed as the funniest in The Pink Panther series.

The Pink Panther Strikes Again (1976) - Peter Sellers is "in top form" (Cue) in this zany adventure that finds the accident-prone Inspector Clouseau using some of his most outlandish disguises ever. With "ferociously funny karate encounters" (Time) with the enigmatic Cato (Burt Kwouk) and dangerous intrigue with a sexy Russian spy (Lesley-Anne Down), this hysterical comedy will strike your funny bone!

Driven over the edge by the maddeningly incompetent Clouseau, former Chief Inspector Dreyfus (Herbert Lom) commandeers a doomsday device and threatens to destroy the world. His only demand? Clouseau's death! But thanks to his nemesis' dumb luck, the assassins hired to kill him can't seem to finish the job - although Clouseau may do it himself by tripping over his own two feet!

Revenge of the Pink Panther (1978) - Chief Inspector Dreyfus (Herbert Lom) happily believes that Clouseau has died in an explosion, but in reality, he's alive and busy mangling a case! Using absurdly mismatched costumes and accents, Clouseau travels to Hong Kong to intercept a major heroin deal, bringing Cato (Burt Kwouk) and the drug lord's jilted lover (Cannon) with him. The only problem is, Dreyfus is on the case too!

Trail of the Pink Panther (1982) - Inspector Clouseau, the lovable buffoon with a knack for mispronunciation, is MIA! The terrifically talented Peter Sellers "induces gales of tonic laughter" (The Hollywood Reporter) in this wild adventure co-starring the full Panther ensemble cast, including David Niven, Herbert Lom, Burt Kwouk and Capucine, along with newcomers Joanna Lumley, Richard Mulligan and Harvey Korman.

The Pink Panther diamond goes missing - and then en route to the scene of the crime, Clouseau's plane goes missing! A sleuthing reporter (Lumley) is assigned to memorialize the fabled detective, but in the process, she comes up against some strange behavior from a delirious Dreyfus (Lom) as well as Clouseau's duplicitous ex-wife (Capucine), his lusty father (Mulligan) and The Phantom (Niven)!

This film was made after Peter Sellers' death, with all his scenes in film consisting of outtakes and deleted footage from other Pink Panther films.

You can find the latest specs for 'The Pink Panther Film Collection' linked from our Blu-ray Release Schedule, where it is now indexed under June 27. 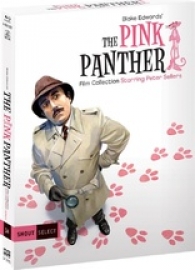