The bonus features for Curtis Hanson's 1990 crime thriller heading to Blu-ray in May have now been detailed.

As previously reported, Shout Factory says 'Bad Influence' will arrive on Blu-ray on May 24.

Quiet, unassuming financial analyst Michael Boll (Spader) lives a successful-yet-timid life, lacking in risks or rewards. When he crosses paths with the enigmatic Alex (Lowe), the two form a friendship based on ever-increasingly bold behavior. When Michael's new pal pushes things too far, however, Michael wants out… but the mysterious Alex has no desire to set him free from the seductively dangerous lifestyle he's dragged him into.

A sexy and suspenseful drama in the vein of Hitchcock's Strangers on a Train, Bad Influence is a crackling thriller from writer David Koepp (Death Becomes Her, Apartment Zero) and Oscar winner* and director Curtis Hanson (L.A. Confidential). Soundtrack by Trevor Jones (Angel Heart, Runaway Train).

Specs have yet to be revealed, but supplements will include: Under the Influence with David Koepp – Interview with writer David Koepp and the Theatrical Trailer.

You can find the latest specs for 'Bad Influence' linked from our Blu-ray Release Schedule, where it's indexed under May 24. 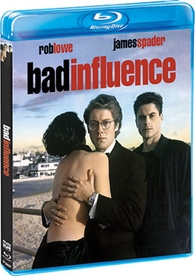