'All Quiet on the Western Front: The Uncut Edition' Blu-ray Dated

The 1979 TV film is gearing up for Blu-ray in July, and you can pre-order the disc now.

In an early announcement to retailers, Shout Factory is preparing 'All Quiet on the Western Front: The Uncut Edition (1979)' for Blu-ray on July 14.

Richard Thomas ('The Waltons') stars in a powerful and dramatic adaptation of Erich Maria Remarque's acclaimed novel All Quiet On The Western Front. At the rise of World War I, German patriot Paul Baumer (Thomas) and his friends enlist in the Imperial German Army. In search of adventure and eager to assert the superiority of their nation, the young men endure a brutal training camp and soon find themselves face to face with the full horrors of war when they are sent to the front lines to fight… and likely die. As the conflict rages, Paul grows from an eager boy to a disillusioned man who bears the scars of war on both his body and his soul.

Specs have not been announced yet, but supplements will include the Original Trailer.

You can find the latest specs for 'All Quiet on the Western Front: The Uncut Edition (1979)' linked from our Blu-ray Release Schedule, where it's indexed under July 14. 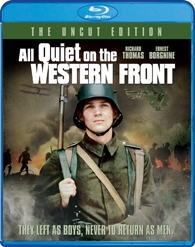 Discs mentioned in this article: (Click for specs and reviews)
All Quiet on the Western Front: The Uncut Edition (1979) (Blu-ray)