All 28 classic comedies will be boxed up in an 80th Anniversary set this November!

As previously reported, Shout Select is bringing Abbott & Costello: The Complete Universal Pictures Collection to Blu-ray, and now the set's supplements have been revealed. Likewise, though the release date was originally listed for November 5, the 15-disc set is now scheduled to arrive on November 19.

Get ready to laugh out loud with the most popular comedy duo of all time in Abbott & Costello: The Complete Universal Pictures Collection! All 28 films produced during the height of their popularity at Universal Pictures are here in one collection. Featuring their most popular movies, such as Buck Privates, Who Done It? and Abbott And Costello Meet Frankenstein, this collection is filled with some of the most hilarious routines of all time, including "Who's on First?"! Loaded with hours of bonus features and an exclusive collectible book, this is the ultimate tribute to two of the funniest and most enduring comedians of all time!

The collection will include:

You can find the latest specs for Abbott & Costello: The Complete Universal Pictures Collection (80th Anniversary Blu-ray Edition) linked from our Blu-ray Release Schedule, where it is indexed under November 19. 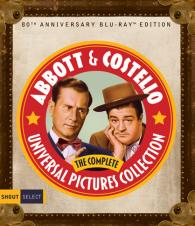