A Trio from Shout! in July

A horror double feature, a crime comedy, and a crime drama will be getting the Blu-ray treatment in July.

In an early announcement to retailers, Shout Factory is working on 'A Shock to the System' for Blu-ray on July 4.

He's killing on impulse … and he won't rest until he gets a corner office.

The loyal and hardworking executive Graham Marshall (screen legend Michael Caine) has paid his dues. He has suffered through mounting bills, the indignities of climbing the corporate ladder, and a nagging wife (Swoosie Kurtz, Sisters) with only an anxiously awaited promotion to keep him going. But that all changes when his promotion is instead given to a boorish associate (Peter Riegert, National Lampoon's Animal House). Annoyed and frustrated, Graham unleashes his rage … in the form of an accidental killing with which he gets away clean! Emboldened by his newfound talent for murder, Graham begins to rethink his business strategy – with deadly results.

Shout Factory is also preparing 'The Night of the Sorcerers / The Loreley's Grasp' for Blu-ray on July 18.

The Night of the Sorcerers (1974) - A group of explorers arrive in Africa to study the wildlife in the same area where a brutal native ritual occurred in 1910. All is tranquil until night falls and distant drumming draws one of the female members of the group to investigate the jungle. From there, a nightmare will be awakened … a nightmare of zombie natives and scantily-clad vampire women who prowl the moonlight jungle in search of fresh blood and more victims to sacrifice. Starring Simón Andreu, Kali Hansa, and María Kosty.

The Loreley's Grasp (1974) - In a town by the Rhine river, young women are turning up dead … savagely torn to pieces and their hearts missing. Concerned that whatever beast is doing these horrible murders will end up attacking the female students, a nearby school for women hires a hunter to find and kill the creature. The hunter will soon find out that this is no ordinary beast that craves human hearts, but rather a deceptive, alluring and mysterious being – The Loreley – who is already looking for another heart to use in a gruesome ancient ritual. Starring Tony Kendall, Helga Liné, and Silvia Tortosa.

Finally, at the end of the month 'Scorchy' will be available on Blu-ray on July 25.

She's Killed A Man, Been Shot At, And Made Love Twice Already This Evening… And The Evening Isn't Over Yet!

You can find the latest specs for 'A Shock to the System', 'The Night of the Sorcerers / The Loreley's Grasp' and 'Scorchy' linked from our Blu-ray Release Schedule, where they are indexed under July. 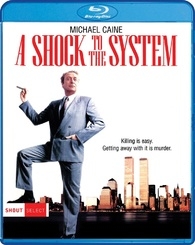 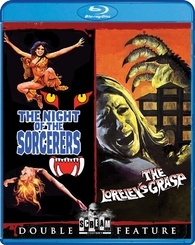 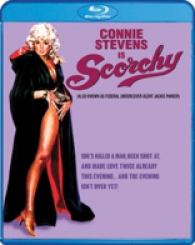