The drama based on the bestselling novel is coming to Blu-ray in June.

In an early announcement to retailers, Shout Factory is preparing The Lonely Lady for Blu-ray on June 13.

She's determined to take nothing less than everything Hollywood has to offer. Golden Globe winner Pia Zadora burns up the screen in The Lonely Lady, the sizzling 1983 adaptation of the bestselling novel by Harold Robbins. Jerilee Randall (Zadora) is a beautiful, idealistic, and talented writer with ambitions of making it big as a screenwriter. But as she makes her way up the Hollywood food chain, she discovers that underneath the movie business' glittering façade is a whirlwind of drugs, depravity, and broken dreams. Struggling to hold onto all she holds dear, she soon descends into a desperate battle to maintain her own sanity. Also starring Lloyd Bochner and Bibi Besch, The Lonely Lady is a tawdry and tantalizing tale of glamour, betrayal, and passion.

You can find the latest specs for The Lonely Lady linked from our Blu-ray Release Schedule, where it's indexed under June 13. 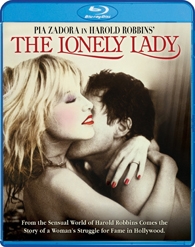 Discs mentioned in this article: (Click for specs and reviews)
The Lonely Lady (Blu-ray)