The 1973 "Dwarfsploitation" film is getting a limited collector's Blu-ray release this February.

In an early announcement to retailers, Severin says 'The Sinful Dwarf: Limited Collector's Edition' will hit on Blu-ray on February 23.

For a VERY limited time only Severin Films will make available 3000 copies of The Sinful Dwarf on Blu-ray. The disc will include two versions of the film, plus bonus feature film from its infamous producers, the ultra-rare, The Blue Balloon, scanned at 2k, plus a host of other exclusive extras.

Upon its restored DVD release in 2009, it was hailed as "deliciously sordid" (Mr. Skin), "the stuff of lewd legend" (PopMatters) and "a masterpiece of depravity" (Cinefantastique Online). But was there any possible way "the most amazing dirty dwarf movie ever made" (Mondo Digital) could be even more amazingly filthy? Severin Films is now unconscionably proud to present both the hard and soft versions of The Sinful Dwarf along with all-new extras including a nightmare-inducing hardcore short starring former kiddie-show host and pint-sized pervert Torben Bille himself. Experience "the mother of all Dwarfsploitation films" (The Daily Grindhouse) like never before, remastered from materials recently seized in a Roskilde vice raid!

Specs have yet to be revealed, but the Blu-ray will include: THE DWARF – Strong International Version; THE ABDUCTED BRIDE – Alternate US Release Version; The Harry Novak Story – Featurette On The Sultan Of Sexploitation With American Grindhouse Director Elijah Drenner; THE BLUE BALLOON – 1973 Feature Film, Never Before Released On Any Home Video Format; THE HOTTEST SHOW IN TOWN – Excerpt From Torben Bille Sex Film; The Search For Torben – Featurette On Effort To Find Cast/Crew From THE SINFUL DWARF; The Severin Controversy – Featurette On The Lasting Effects Of THE SINFUL DWARF; Trailers, TV Spot, Radio Spot; and Newly commissioned cover art by Wes Benscotter.

You can find the latest specs for 'The Sinful Dwarf: Limited Collector's Edition' linked from our Blu-ray Release Schedule, where it is indexed under February 23. 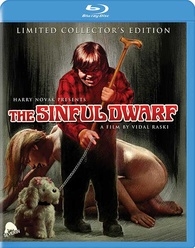