The 1981 horror is planned for Blu-ray in January.

In an early announcement to retailers, Severin says 'The Survivor' will be available on Blu-ray on January 10.

When a 747 crash lands in a Sydney suburb -- a still-spectacular sequence that helped make this the most expensive Australian film of its time -- the inferno kills everyone on board except the pilot (Robert Powell of Jesus of Nazareth and Tommy) who emerges from the wreckage miraculously unscathed. But as a local psychic (Jenny Agutter of An American Werewolf in London) begins to communicate with the spirits of the doomed passengers, it will unlock a nightmare of madness, murder and supernatural horror.

You can find the latest specs for 'The Survivor' linked from our Blu-ray Release Schedule, where it is indexed under January 10. 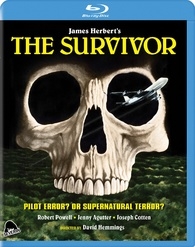