Roman Polanski Says 'What?' on Blu-ray

The controversial 1972 comedy is headed for Blu-ray in April.

In an early announcement to retailers, Severin will be releasing 'What?' on Blu-ray on April 26.

Roman Polanski described it as the ribald adventures of an innocent girl. More than four decades after its controversial release, it remains the most butchered, debated and least-seen film of the Oscar-winning director's entire career.

The succulent Sydne Rome stars as an oft-naked American girl lost inside a Mediterranean villa inhabited by priests, pianists, perverts and a pimp (a deliciously bizarre performance by Marcello Mastroianni) while indulging in madcap acts that even include ping-pong. Hugh Griffith (Tom Jones), Romolo Valli (Boccaccio 70) and Polanski himself co-star in this surreal and sexy comedy, now finally restored to its original running time from a vault print reportedly stolen from the wine cellar of producer Carlo Ponti.

You can find the latest specs for 'What?' linked from our Blu-ray Release Schedule, where it is indexed under April 26. 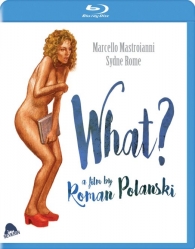