'Return of Kung Fu Trailers of Fury' Headed for Blu-ray

Over thirty more action-packed martial arts trailers are bound for Blu-ray in March.

In an early announcement to retailers, Severin Films is working on 'Return of Kung Fu Trailers of Fury' for Blu-ray on March 14.

You can find the latest specs for 'Return of Kung Fu Trailers of Fury' linked from our Blu-ray Release Schedule, where it is indexed under March 14. 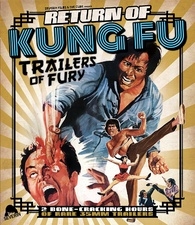