In an early announcement to retailers, Severin is preparing to release 'Kung Fu Trailers of Fury' on Blu-ray on February 23.

Get ready for the most hard-kicking, face-smashing, snake-fisting trailer collection of them all! From the golden age of kung fu cinema comes this insane tsunami of masters, mobsters, furious vengeance and incredible fighting styles, starring Bruce Lee, Jackie Chan, Lo Lieh, Sammo Hung, Angela Mao, Chuck Norris, Jimmy Wang Yu and Wu Tang, too. These are the most over-the-top and rarely-seen original trailers for Hong Kong classics that include The Way of the Dragon, Death Blow, Two Champions of Shaolin, Daggers 8, Snake in the Eagle's Shadow, Shaolin Wooden Men, The Story of Drunken Master, Enter the Fat Dragon, Brutal Boxer, and many more, plus exclusive new bonus features that deliver unique historical and cultural perspectives on the amazing world of martial arts movies. Transferred in 2K from a collection of recently unearthed 35mm reels.

Specs have yet to be revealed, but supplements include: A Brief History of Kung Fu Cinema: Featurette With Experts Ric Meyers and Frank Djeng; Audio Commentary with experts Ric Meyers (Films of Fury), Michael Worth (The Bruceploitation Bible), Martial Arts Instructor Greg Schiller & Rick Stelow of Drunken Master Video; and The Way of the Cube- Featurette on the discovery of the original 35mm trailers underneath the stage of a maverick UK cinema.

You can find the latest specs for 'Kung Fu Trailers of Fury' linked from our Blu-ray Release Schedule, where it is indexed under February 23. 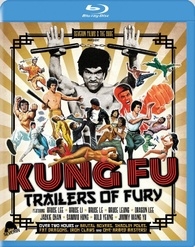