The two cult horror films from the Spanish director will prey on Blu-ray audiences in May.

As previously reported, Severin Films is preparing 'She Killed In Ecstasy' and 'Vampyros Lesbos' for Blu-ray sometime in 2015, and now the date for both releases has been set for May 12.

'She Killed In Ecstasy'- For his follow-up to VAMPYROS LESBOS, writer/director Jess Franco delivered perhaps his most twisted shocker of the 70s: In what fans and critics consider to be her greatest role, the luscious Soledad Miranda in one of her final performances before her tragic death stars as the vengeful widow who seduces then murders the men and women responsible for her husband's suicide. Howard Vernon (THE AWFUL DR. ORLOFF), Paul Muller (BARBED WIRE DOLLS), Ewa Strömberg (VAMPYROS LESBOS) and Jess himself co-star in this EuroCult classic featuring another epic sexadelic lounge score by Manfred Hübler & Siegfried Schwab now remastered in HD and featuring all-new Extras. It's Franco at his perversely erotic best, like you ve never seen or heard it before!

'Vampyros Lesbos' - From Jess Franco, the filmmaker The Vatican called the most dangerous director in the world , comes the most celebrated movie of his legendary career: Stunning Soledad Miranda stars as a vixen vampire who lures women to a Mediterranean island to satisfy her insatiable lust for female flesh and blood. It s a mind-bending odyssey of surreal erotica and 70s EuroHorror, featuring the psycho-sexadelic soundtrack that remains a global phenomenon. Ewa Strömberg (SHE KILLED IN ECSTASY), Dennis Price (VENUS IN FURS), Paul Muller (NIGHTMARE CASTLE) and Franco himself co-star in this landmark cult classic, now remastered in HD and featuring all-new Extras filmed with the director shortly before his death. Experience Franco' masterpiece like you'e never seen or heard it before!

You can find the latest specs for 'She Killed In Ecstasy' and 'Vampyros Lesbos' linked from our Blu-ray Release Schedule, where they're indexed under May 12. 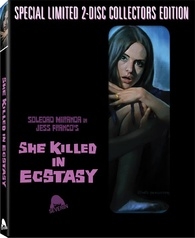 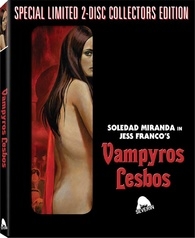