The sex documentary is planned for Blu-ray in April.

In an early announcement to retailers, Severin says 'That's Sexploitation!' will arrive on Blu-ray on April 26.

From director Frank Henenlotter (Basket Case, Brain Damage) and co-producer Mike Vraney (the late founder of Something Weird Video) comes the epic documentary critics call "fascinating" (Video Watchdog), "titillating" (Time Out Los Angeles) and "jaw-dropping" (Seattle Weekly): Henenlotter and legendary exploitation monarch David F. Friedman – in his final film appearance – are your hosts for this eye-popping expedition through the world of pre-code peekaboos, stags, sex-hygiene films, goona-goonas, nudie-cuties, roughies, druggies, white-coaters and more, featuring thousands of spicy, steamy and downright sleazy slips from the SWV archives. And is that's not enough to tickle your pickle, Bonus Features include an additional 3+ hours of rare loops and shorts from four decades of Sexploitation history!

Specs have yet to be revealed, but supplements will include: Over 3.5 hours of Sexploitation Shorts from the Something Weird Archives; Audio Commentary with Director Frank Henenlotter and Something Weird's Lisa Petrucci; and Trailer.

You can find the latest specs for 'That's Sexploitation!' linked from our Blu-ray Release Schedule, where it is indexed under April 26. 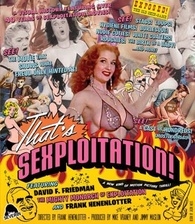