The 1981 cult horror flick will be available on Blu-ray just in time for Halloween.

In an early announcement to retailers, Severin is preparing 'Burial Ground: The Nights of Terror' for Blu-ray on October 25.

For his only foray into the zombie genre, sleaze maestro Andrea Bianchi (MALABIMBA: THE MALICIOUS WHORE) unleashes enough flesh-ripping, gut-chomping and depraved mayhem to set insane new standards in Italian horror: Mariangela Giordano (of SATAN'S BABY DOLL and MALABIMBA fame) stars in the splatter classic about a cursed country estate besieged by houseguests, undead Etruscans and the relationship between a mother (Giordano) and her mega-creepy young son (disturbingly portrayed by diminutive actor Peter Bark). Severin Films is improbably proud to present the definitive version of this gorehound favorite, now packed with all-new Extras and featuring a 2k scan and restoration from an immaculate 35mm print recently discovered beneath the floorboards of a Trastevere church rectory.

Severin will also have a limited edition release with an exclusive cover by Wes Benscoter and copies purchased through Severin's site will come with a free 12×18 poster or a Special Bundle Package with Poster, enamel pin, 'Smells Of Death' t-shirt and a 'Smells of Death Shot Glass'.

You can find the latest specs for 'Burial Ground: The Nights of Terror' linked from our Blu-ray Release Schedule, where it is indexed under October 25. 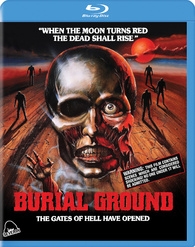