Episodes 13 to 24 of the anime series will hit Blu-ray in May.

In an early announcement to retailers, Section23 is preparing to release 'Muv-Luv Alternative Total Eclipse: Collection 2' on Blu-ray on May 12.

Even in the face of annihilation by the invading BETA forces, the persistent hostilities between the surviving nations continue to undermine mankind's chances for survival. Desperate to gain the Type 99, the Soviet Command puts not only their own pilots but the rest of the human race on the firing line as they sabotage the Kamchatka base self-destruct codes in an attempt to salvage the railgun for their own purposes.

Caught in the crossfire, Yuuya, Yui, and the other TSF pilots must fight their way to safety through a nightmarish series of traps and counter-traps before the base is bombed or the BETA take them all. Only a series of heroic sacrifices can save them, and that's just the beginning of the danger. The mysterious arrival of an unidentified TSF and an escalating competition to dominate the new world's power and military structures ignite a new chain of events that further threaten to undercut humanity's chances.

The 2-disc set will feature 1080p video, lossless 2.0 soundtracks (in English and Japanese) and supplements will include clean opening and closing animations.

You can find the latest specs for 'Muv-Luv Alternative Total Eclipse: Collection 2' linked from our Blu-ray Release Schedule, where it is indexed under May 12. 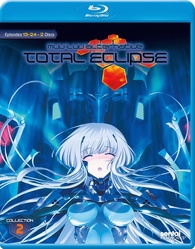