The 1988 horror flick will scare up Blu-ray in June.

In an early announcement to retailers, Scream Factory is working on 'Scarecrows' for Blu-ray on June 2.

Five people heist the Camp Pendleton payroll, kidnap a pilot and his daughter, who are forced to fly them to Mexico. Enroute a double cross has one of the thieves parachute with the loot into an abandoned graveyard surrounded by strange scarecrows. Two of the team jump after their loot and their former partner. Everything happens during the course of one very dark night...

You can find the latest specs for 'Scarecrows' linked from our Blu-ray Release Schedule, where it is indexed under June 2. 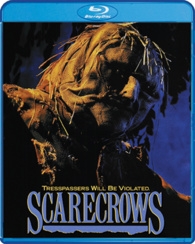