Wes Craven's 'The Serpent and the Rainbow' Blu-ray Supplements Detailed

The delayed horror flick starring Bill Pullman will now arrive on Blu-ray in the new year.

As previously reported, Scream Factory is bringing 'The Serpent and the Rainbow' to Blu-ray in 2016 with a release date of February 23.

Specs have yet to be revealed, but this release will feature a new 2015 HD transfer from the inter-positive film element; NEW audio commentary with actor Bill Pullman; NEW The Making of The Serpent and the Rainbow featuring new interviews with actor Bill Pullman, author Wade Davis, director of photography John Lindley and special makeup effects artists Lance Anderson and David Anderson; Theatrical Trailer; TV Spot: and Still Gallery.

You can find the latest specs for 'The Serpent and the Rainbow' linked from our Blu-ray Release Schedule, where it's indexed under February 23. 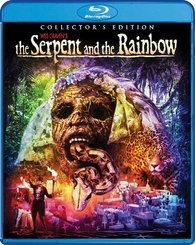