The 1988 horror flick starring Bill Pullman getting the Blu-ray treatment this summer has now been officially dated.

As previously reported, Scream Factory is working on 'The Serpent and the Rainbow' for Blu-ray sometime later this year, and now the date has been set for August 11.

You can find the latest specs for 'The Serpent and the Rainbow' linked from our Blu-ray Release Schedule, where it's indexed under August 11. 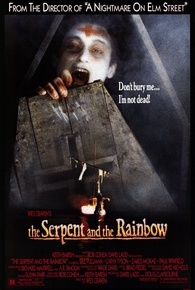