The classic horror film has received a new transfer and will be available on Blu-ray in October.

In an early announcement to retailers, Scream Factory will be releasing 'Child's Play: Collector's Edition' on Blu-ray on October 18.

The "chills come thick and fast" (Los Angeles Times) in this riveting, jolt-a-minute thriller about an innocent-looking doll inhabited by the soul of a serial killer who refused to die. From the director of Fright Night, Child's Play comes complete with "excellent special effects" (Leonard Maltin) and a slew of special features that make this Blu-ray your "friend to the end!"

In this "clever, playful thriller" (The New York Times), only six-year-old Andy realizes that Chucky is responsible for a spate of gruesome murders, including that of his unsuspecting babysitter. But the real terror takes hold when the deranged doll becomes determined to transfer his evil spirit to a living human being... Andy!

Fans of the film will want to take note of two exclusive offers on the release—which are only available at www.shoutfactory.com while supplies last: a standard offer that includes a slipcover and a limited-edition 18” x 24” poster of the newly-designed art from artist Justin Osbourn -- shipped two weeks earlier than National Street date of October 18th; and a deluxe offer that is limited to 2000 units and includes everything above plus a second "Good Guys" slipcover—made exclusively for this promotion and a second 18” x 24” poster of the newly designed art -- shipped two weeks earlier than national street date plus an exclusive, limited edition 5.5" tall "Good Guys" Chucky" doll created by NECA and housed in a "Good Guys" box.

You can find the latest specs for 'Child's Play: Collector's Edition' linked from our Blu-ray Release Schedule, where it is indexed under October 11. 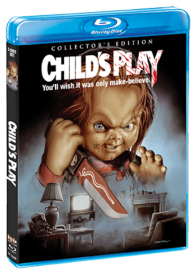