Unleash the 'Hellions' on Blu-ray!

The unsettling thriller from director Bruce McDonald ('Pontypool') is headed for Blu-ray next month.

In an early announcement to retailers, Scream Factory will be bringing 'Hellions' to Blu-ray on February 2.

Under siege by forces she doesn’t understand, Dora must defend both body and soul from relentless hellions, dead set on possessing something Dora will not give them. Set in a visually haunting landscape and featuring an innovative, atmospheric score, Hellions redefines the boundaries of horror with its potent brew of Halloween iconography, teenage angst and desperate survival.

You can find the latest specs for 'Hellions' linked from our Blu-ray Release Schedule, where it is indexed under February 2. 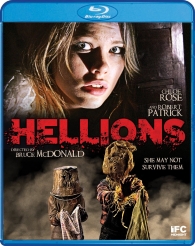