The 1986 remake of the classic thriller is bound for Blu-ray in April.

In an early announcement to retailers, Scream Factory is working on 'Invaders from Mars' for Blu-ray on April 7.

Little David Gardner's starry-eyed dreams turn into an out-of-this-world nightmare when invaders from the red planet land in his backyard and unleash their hostilities on unsuspecting earthlings! Paralyzed with fear as the aliens take over the minds of his mother, father and even his classmates, David must somehow find a way to stop them- before they turn the whole human race into brain-dead zombies!

You can find the latest specs for 'Invaders from Mars' linked from our Blu-ray Release Schedule, where it is indexed under April 7. 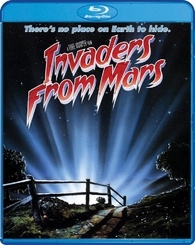