The thriller from the director behind the beloved 80’s supernatural horror film 'The Gate' is planned for Blu-ray in July.

In an early announcement to retailers, Scream Factory is set to release 'I, Madman' on Blu-ray on July 21.

After a spine-tingling paperback catches the imagination of bookstore clerk Virginia, she seeks out the author's second book, I, Madman. But once she opens the cover, its eerie tale of obsessive love comes to life, catapulting a disfigured, scalpel-wielding killer from the world of fiction onto the streets of Hollywood with one demented goal: to win Virginia's love, one murder at a time! Directed cult filmmaker Tibor Takacs (The Gate), I, MADMAN stars Jenny Wright (Near Dark, The Lawnmower Man), Clayton Rohner (April Fool’s Day, The Human Centipede III) and three-time Academy Award® winner Randall William Cook (Dr. Caligari) as the mysterious and frightening Malcolm Brand.

You can find the latest specs for 'I, Madman' linked from our Blu-ray Release Schedule, where it is indexed under July 21. 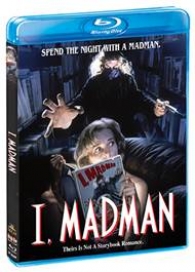