Five more classic horror films will be in the third volume of the Vincent Price Collection in February.

In an early announcement to retailers, Scream Factory is preparing 'The Vincent Price Collection III' for Blu-ray on February 16.

Master of the World (1961) - In 1848, a fanatical inventor seeks to fly around the world and stop war from his flying airship (the "Albatross")...a cross between a zeppelin and a helicopter. Adapted from two Jules Verne novel -- Master of the World and The Conqueror. Starring Vincent Price, Charles Bronson, Henry Hull, and Vito Scotti.

The Blu-ray will feature 1080p video, a DTS-HD MA stereo soundtrack, and supplements will include:

-Interview with director Roger Corman
-"Producing Tower of London" – an interview with producer Gene Corman
-Two episodes of Science Fiction Theatre: “One Thousand Eyes” and “Operation Flypaper” (1956) both starring Vincent Price (in Standard Definition – 52 minutes)
-Posters, Lobby Cards and Behind-the-Scenes Photo Gallery
Diary of a Madman (1963) - Vincent Price turns in a classic performance as a sculptor, possessed by an evil spirit, who hires a model (Nancy Kovack) to pose for him - then learns thereafter that she has been brutally murdered. Starring Vincent Price, Nancy Kovack, Chris Warfield, Ian Wolfe, and Elain Devry.

-Audio Commentary with film historian and author Steve Haberman
-Theatrical Trailer
-Poster and Lobby Card GalleryCry of the Banshee (1970) - Vincent Price is diabolical, commanding and "as brutally horrific as ever" (Motion Picture Exhibitor) as a corrupt English magistrate who leads a crusade to rid the countryside of witches...but doesn't mind accosting a few innocent wenches on his way! Murder, torture and titillation are just a few methods of interrogation in this lurid "witchcraft shocker" (Motion Picture Exhibitor) that pits evil against more evil in a duel to the death! Also starring Essy Persson, Hilary Heath, Carl Rigg, and Stephan Chase. Director's Cut and Theatrical Cut included.

The Blu-ray will feature SD video, a DTS-HD MA mono soundtrack, and supplements will include:

Suggested list price for the 4-Disc Blu-ray Collection is $69.97.

You can find the latest specs for 'The Vincent Price Collection III' linked from our Blu-ray Release Schedule, where it's indexed under February 16. 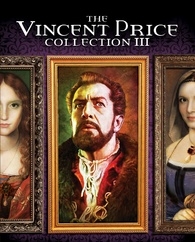 Discs mentioned in this article: (Click for specs and reviews)
The Vincent Price Collection III (Blu-ray)