The Suspense is Infectious When 'Cabin Fever' Returns to Blu-ray

The 2016 remake of Eli Roth's horror-comedy will infect Blu-ray in July.

In an early announcement to retailers, Scream Factory will be releasing 'Cabin Fever' on Blu-ray on July 5.

It will make your flesh crawl … Executive Producer Eli Roth presents Cabin Fever, a reboot of his instant classic gorefest. This story is familiar: Just out of college, a group of five friends retreat to a remote cabin in the woods for one last week of partying – only to become snacks for a gruesome, flesh-eating virus. This fresh spin on a horror-comedy milestone stars Gage Golightly (Exeter, Teen Wolf), Nadine Crocker (Deadgirl), Samuel Davis (Machete Kills, Sin City: A Dame to Kill For) and Dustin Ingram (Paranormal Activity 3).

Specs have yet to be revealed, but the Blu-ray will include a featurette and trailer.

You can find the latest specs for 'Cabin Fever' linked from our Blu-ray Release Schedule, where it is indexed under July 5. 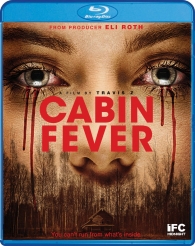