The film starring Chloë Sevigny and Timothy Hutton is headed for Blu-ray in April.

In an early announcement to retailers, Scream Factory will be releasing '#Horror' on Blu-ray on April 5.

You’ve got followers… cyberbullying goes offline during one deadly night. #Horror follows a group of preteen girls living in a suburban world of money and privilege. But when their obsession with a disturbing online game goes too far, virtual terror becomes all too real.

In #Horror, Chloë Sevigny (American Horror Story, American Psycho) leads an ensemble cast that includes Timothy Hutton (American Crime, The Dark Half) and Natasha Lyonne and Taryn Manning of Orange is the New Black. This shocking chiller is written and directed by actress and designer Tara Subkoff (The Cell, The Last Days of Disco).

You can find the latest specs for '#Horror' linked from our Blu-ray Release Schedule, where it is indexed under April 5. 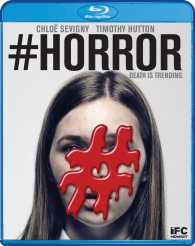