'The Return of the Living Dead: Collector's Edition' Announced for Blu-ray

Dan O’Bannon's 1985 zombie flick is getting a collector's edition Blu-ray in July.

In an early announcement to retailers, Scream Factory will be releasing 'The Return of the Living Dead: Collector's Edition' on Blu-ray on July 19.

Writer/director Dan O’Bannon (Alien, Lifeforce) puts an uproarious spin on the zombie apocalypse movie in 1985’s cult classic The Return Of The Living Dead, starring Clu Gulager (A Nightmare on Elm Street 2: Freddy's Revenge), James Karen (Mulholland Drive) and Don Calfa (Weekend at Bernie’s). Considered one of the campiest undead romps of its time, the film helped launch the career of scream queen Linnea Quigley (Night of the Demons, Sorority Babes in the Slimeball Bowl-O-Rama) and features a killer soundtrack with tracks from many songs from punk artists such as The Cramps, T.S.O.L. SSQ and 45 Grave. This collector's set includes a brand new 2K scan of the film and over 12 hours of extras!

You can find the latest specs for 'The Return of the Living Dead: Collector's Edition' linked from our Blu-ray Release Schedule, where it is indexed under July 19. 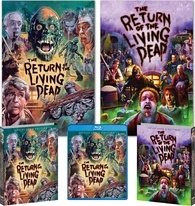