Two double features are headed for Blu-ray in July.

In an early announcement to retailers, Scream Factory is preparing 'The Outing/The Godsend' and 'Cellar Dweller/Catacombs' for Blu-ray on July 14.

The Outing - An ancient genie is released from a lamp when thieves ransack an old woman's house. They are killed and the lamp is moved to a museum to be studied. The curator's daughter is soon possessed by the genie and invites her friends to spend the night at the museum, along with some uninvited guests. The genie kills them off in an attempt to fulfill her ultimate wish.

The Godsend - An English family of six takes in a pregnant woman who disappears shortly after giving birth. They raise the baby girl as their own, but over the years the strange deaths of their children make them consider whether the little girl is more than she appears.

Cellar Dweller - In the 1930s a horror-comic artist's creations come alive and kill him. Years later a new cartoonist revives the creatures in his house, now part of an artist's colony.

Catacombs - A demon is trapped in a monastery. 400 years later a young girl arrives at the monastery to study.

You can find the latest specs for 'The Outing/The Godsend' and 'Cellar Dweller/Catacombs' linked from our Blu-ray Release Schedule, where they are indexed under July 14. 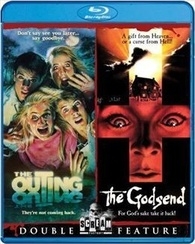 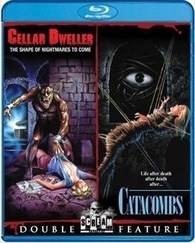