The release will arrive on Blu-ray in mid-December.

As previously reported, Scream Factory is preparing 'The Dungeonmaster / Eliminators' for Blu-ray on December 15.

THE DUNGEONMASTER (aka RAGEWAR) - Paul, a young computer ace, is forced to pit his physical and mental skills against unimaginable odds when a hulking wizard looking for formidable opponents picks Paul as his next challenger. Paul faces a series of seven spectacular and death-defying challenges and must survive not only to save his life but that of his girlfriend's too! Jeffrey Byron (Metalstorm: The Destruction Of Jared-Syn) and Richard Moll (Night Court) star in this eye-popping thriller featuring an appearance by W.A.S.P.! Unrated Version.

This version of THE DUNGEONMASTER is Unrated and different from the PG-13 version shown theatrically. It includes an additional scene with some nudity. Parental Discretion is advised.

ELIMINATORS - A mandroid – part man and part machine – seeks revenge on the evil scientist who created him. Enlisting the help of a beautiful woman and a mysterious ninja, he pursues the scientist in hopes of stopping him before he can be further harm to humanity. Andrew Prine (The Town That Dreaded Sundown) and Denise Crosby (Star Trek: The Next Generation) star. NEW High-Definition Transfer.

Specs have yet to be revealed, but supplements will include: NEW Interview with director Peter Manoogian and Theatrical Trailer (The Dungeonmaster).

You can find the latest specs for 'The Dungeonmaster / Eliminators' linked from our Blu-ray Release Schedule, where it's indexed under December 15. 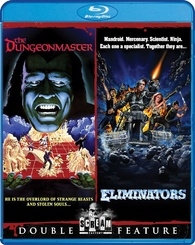