'The Curse / Curse II: The Bite' Bound for Blu-ray

The horror flick double feature will hit Blu-ray in February.

In an early announcement to retailers, Scream Factory is preparing 'The Curse / Curse II: The Bite' for Blu-ray on February 23.

'The Curse' - Life on the family dairy farm is difficult for young Zach Hayes (Wil Wheaton, Stand by Me): hard work, long hours and the normal family squabbles. But after an ice-blue meteor plunges through the midnight sky and lands on their property, it gets worse. Zach and the local doctor discover that something inside the meteor is infecting every living thing on the farm. Fruits, which look perfect on the outside are teeming with worms… and Zach’s family is beginning to change… hideously! This shocker is directed by actor David Keith (Firestarter, White of the Eye) and co-stars Claude Akins (Tentacles), Malcolm Danare (Christine), Cooper Huckabee (The Funhouse) and John Schneider (Smallville). 'Curse II: The Bite' - Two young lovers, Clark (J. Eddie Peck, Kyle XY) and Lisa (Jill Schoelen, The Stepfather), traveling through the desert unwittingly pass through an abandoned nuclear test site which has become a breeding ground for deadly mutant killer snakes. When Clark is bitten, he undergoes a grotesque transformation into a hideous snake monster! This chiller filled with slithering horror also stars Jamie Farr (M*A*S*H), Shiri Appleby (Roswell) and Bo Svenson (Walking Tall Part II).

Suggested list price for the Blu-ray Double Feature is $26.99.

You can find the latest specs for 'The Curse / Curse II: The Bite' linked from our Blu-ray Release Schedule, where it's indexed under February 23. 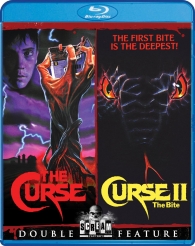 Discs mentioned in this article: (Click for specs and reviews)
The Curse / Curse II: The Bite (Blu-ray)