The 1962 film will arrive on Blu-ray in December and now supplements have been fully detailed for the release.

As previously reported, Scream Factory is working on 'The Brain Wouldn't Die' for Blu-ray on December 22.

Medical science leaps light years into the future in this "great, absurd movie" (The Psychotronic Encyclopedia of Film) that explores the strange world of transplants, cloning and mutant regeneration. Strangely relevant in today's ethically challenged world, this presents a truly psycho-surgery case and is "one of the great sci-fi sleaze classics" (Starlog).

When Dr. Bill Cortner loses his sweetheart, Jan, in a car accident, he refuses to give up hope for her life. Scooping up her decapitated head, he brings it back to the lab for resuscitation. But keeping her head alive is one thing – finding her a new body is quite another. So while the mad doctor is out looking for spare parts, she's stuck at home going out of her mind – literally! And nothing will stop her from getting revenge on the man who is keeping her as a trophy girlfriend!

The Blu-ray will feature a new high definition (1080p) transfer from the negative restored to its uncut version and supplements will include: Mystery Science Theater 3000 Episode - The Brain That Wouldn't Die (Standard Definition); NEW Audio Commentary With Film Historian And Author Steve Haberman And Writer Tony Sasso; Alternate Scene From The International Cut; Theatrical Trailer; and Still Gallery.

You can find the latest specs for 'The Brain That Wouldn't Die' linked from our Blu-ray Release Schedule, where it is indexed under December 22. 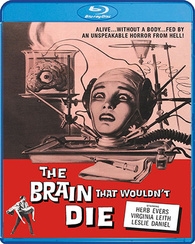