Bonus features have been revealed for the 1990 horror flick heading to Blu-ray in January.

As previously reported, Scream Factory is working on 'The Guardian' for Blu-ray on January 19.

William Friedkin, the Academy Award winning director of The Exorcist, delivers a new kind of fairy tale for adults.

A handsome young couple finds the perfect live-in babysitter to look after their newborn child. It seems like a fairy tale, until ancient, supernatural forces turn the couples dream into a nightmare.

In his first horror film since The Exorcist, Oscar-winning director William Friedkin spins a terrifying tale based on every parent's worst fear. Jenny Seagrove (Local Hero) portrays the enchanting guardian who enters the home of new parents Dwier Brown (Red Dragon) and Carey Lowell (Licence to Kill) possessing impeccable references and an affinity for children. But as her true intentions are revealed, the battle for the child's soul begins in this chilling film based on Dan Greenburg's popular novel, The Nanny.

You can find the latest specs for 'The Guardian' linked from our Blu-ray Release Schedule, where it's indexed under January 19. 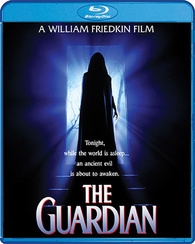