The 1989 cult sci-fi classic will hit Blu-ray and will be loaded with bonus features this July.

In an early announcement to retailers, Scream Factory will be releasing 'Robot Jox' on Blu-ray on July 7.

Directed by Stuart Gordon (Re-Animator), Robot Jox reveals a world where nations settle their territorial disputes by a single combat between two giant machines. Piloted by national heroes Achilles (Gary Graham, TV's Alien Nation) and Alexander (Paul Koslo, Shadowchaser), the robots meet in Death Valley to fight for the greatest prize of all: Alaska. But when Achilles' machine crushes 300 spectators, the match ends in a draw. Refusing to face Alexander in a rematch, Achilles is replaced by Athena (Anne-Marie Johnson, TV's Melrose Place), a genetically-engineered combat fighter. So when the GenJox is nearly killed and the game is forfeited, Achilles avenges their honor by challenging Alexander to a winner-take-all death match, in this heavy-metal, sci-fi adventure.

You can find the latest specs for 'Robot Jox' linked from our Blu-ray Release Schedule, where it is indexed under July 7. 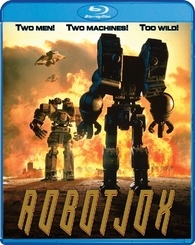