The cult classic horror flick is heading to Blu-ray.

A peaceful town is suddenly terrorized by a maniacal killer. The townsfolk think a madman is on the loose, but a wheelchair-bound 13-year-old (Corey Haim) knows the truth ... a werewolf is on the hunt. With the help of his Uncle Red (Gary Busey), young Marty Coslaw sets out to stop the half-man/half-beast before he sinks his teeth into another innocent victim. Now, time is ticking ... and the full moon is about to rise.

The disc will feature a 1080p video transfer and a mono DTS-HD MA audio mix. Supplements will include:

You can find the latest specs for Stephen King's Silver Bullet: Collector's Edition linked from our Blu-ray Release Schedule, where it is now indexed under December 17. 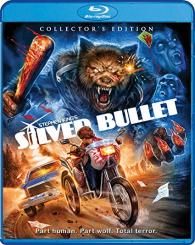