The 1995 horror film starring Ben Kingsley, Natasha Henstridge, and Forest Whitaker is getting a Collector's Edition Blu-ray this summer.

As previously reported, Scream Factory is working on 'Species: Collector's Edition' for Blu-ray this summer, and now the date has been set for July 11.

When a beautiful human-alien hybrid escapes from observation, scientist Xavier Fitch dispatches a crew of experts to find her before she is able to fulfill her horrific purpose: to mate with unsuspecting men and produce offspring that could destroy mankind. As her deadly biological clock ticks rapidly, Fitch and his team are hurled into a desperate battle in which the fate of humanity itself hangs in the balance!

You can find the latest specs for 'Species: Collector's Edition' linked from our Blu-ray Release Schedule, where it is indexed under July 11. 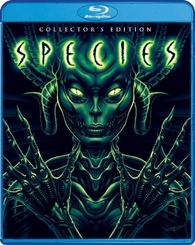