The double feature will be available in stores early next year.

Slumber Party Massacre II - Courtney, the younger sister of the "new girl across the street" in the first film is all grown up now, but suffers from nightmares about the Big Wet Incident. She and the other members of her female rock group go to a condo for the weekend to play music and have fun with their boyfriends. Courtney's dreams are of her sister, who is in a mental institution, warning her of having sex, and the dreams begin to spill into real life, threatening Courtney and her friends as they begin experiencing an attrition problem.

Slumber Party Massacre III - After a hard day of volleyball at the beach, a teen whose parents are away decides to have a slumber party with her girlfriends. Their boyfriends predictably show up to scare them, but a stranger from the beach is also seen lurking around the house. Soon the group begins experiencing an attrition problem.

Specs and supplements have yet to be revealed, but suggested list price is $29.99. 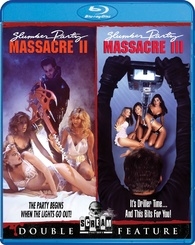