The horror series will terrify Blu-ray in July.

In an early announcement to retailers, Scream Factory is preparing 'Slasher: Season One' for Blu-ray on July 12.

Thirty years ago, in the sleepy community of Waterbury, a killer known as "The Executioner" murdered Sarah Bennett's parents. Now Sarah (Katie McGrath) and her husband Dylan (Brandon Jay McLaren) have returned to town, only to find herself the centerpiece in a series of horrifying murders centered around the seven deadly sins. It seems "The Executioner" is back. But if Tom Winston - the original Executioner - is behind bars, who is the new person behind the mask? As the murders escalate, long-buried secrets are revealed, making everyone around Sarah a suspect…or a victim.

Specs have not been detailed yet, but supplements will include a Behind-the-Scenes featurette.

You can find the latest specs for 'Slasher: Season One' linked from our Blu-ray Release Schedule, where it's indexed under July 12. 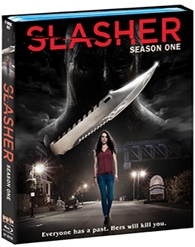 Discs mentioned in this article: (Click for specs and reviews)
Slasher: Season One (Blu-ray)