The 1995 horror anthology starring Clarence Williams III is headed for Blu-ray this April.

In an early announcement to retailers, Scream Factory is working on 'Tales from the Hood: Collector's Edition' for Blu-ray on April 18.

Welcome to the 'hood of horrors!

Stack, Ball and Bulldog arrive at a local funeral parlor to retrieve a lost drug stash held by the mortician Mr. Simms (Clarence Williams III). But Mr. Simms has plans for the boys. He leads them on a tour of his establishment, introducing them to his corpses. Even the dead have tales to tell and Mr. Simms is willing to tell them all. And you better listen – because when you're in the 'hood, even everyday life can lead to extraordinary terror.

You can find the latest specs for 'Tales from the Hood: Collector's Edition' linked from our Blu-ray Release Schedule, where it is indexed under April 18. 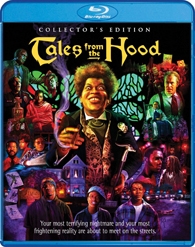