The 1999 horror/thriller starring Patricia Arquette, Jonathan Pryce, and Gabriel Byrne will be getting the high-definition treatment in May.

As previously reported, Scream Factory will be releasing 'Stigmata' on Blu-ray on May 12.

Frankie Paige (Patricia Arquette) has absolutely no faith in God. All of that changes when she suddenly begins to suffer the Stigmata - the living wounds of the crucified Christ. Frankie's miraculous bleeding comes to the attention of the Vatican's top investigator, Father Kiernan (Gabriel Byrne). But when Cardinal Houseman (Jonathan Pryce), discovers that Frankie is actually channeling an extraordinary and provacative message that could destroy the Church, he's convinced that she - and the force possessing her - must be forever silenced. Determined to stop this deadly conspiracy, Kiernan risks his faith - and his life - to save her and the message that will change the destiny of mankind forever.

Specs have yet to be revealed, but supplements will include: Audio commentary with director Rupert Wainwright; Incredible But True – Stigmata: Marked For Life (45 Min.); Divine Rights: The Story Of Stigmata (26 Min.); Music Video – “Identify” by Natalie Imbruglia; Deleted Scenes; Alternate Ending; and Theatrical Trailer.

You can find the latest specs for 'Stigmata' linked from our Blu-ray Release Schedule, where it's indexed under May 12. 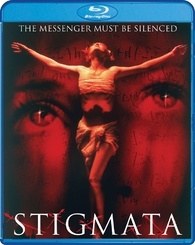