The supplements for the horror sequel headed for Blu-ray in October have now been finalized. Pre-order here.

As previously reported, Scream Factory is working on 'Pumpkinhead II: Blood Wings' for Blu-ray on October 28.

When five teenagers unwittingly resurrect a demon, nobody is safe from the hideous creature's gruesome rampage. But this monster is different - inside it dwells the soul of a boy murdered years ago. Can the evil beast be destroyed...without killing the innocent boy trapped within? Starring Andrew Robinson, Ami Dolenz, Soleil Moon Frye, J. Trevor Edmond, Hill Harper, and Gloria Hendry.

You can find the latest specs for 'Pumpkinhead II: Blood Wings' linked from our Blu-ray Release Schedule, where it is indexed under October 28. 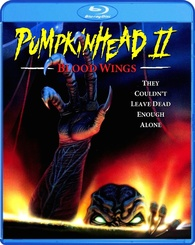